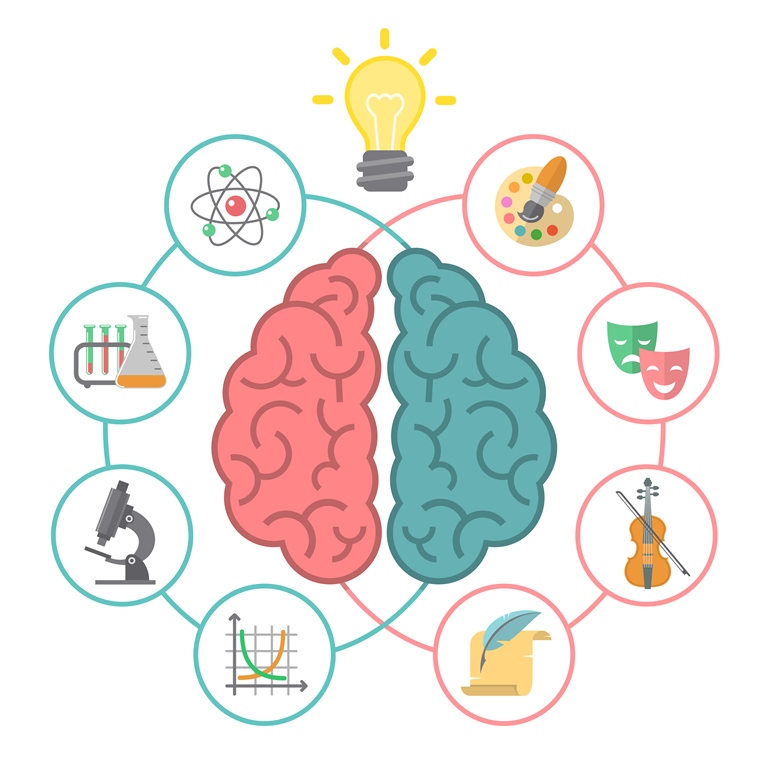 The academic and school world is divided into two groups of people: the arts people and the math and science people. In other words, the right brain and the left brain people. Most people who are good at English, history, and the arts are not generally as skilled in math or science.

Ever since Roger Sperry performed experiments and research on how the human brain functions, we have understood that our brain is divided into two parts. Each part controls one side of the body and communicates different information, both of which work together to make the body function. These parts, the left and the right, often have a stronger presence in different people. Therefore, in some people the left side of the brain has more prominence while in others it is the right side of the brain.

The left side of the brain controls language functions. It processes speaking and communicating messages, and retrieves facts from the brain’s memory. Those people who utilize their left brain more are the math and science people. These people generally have better memories and think in a linguistic and logistic way. Computing is easier, and they are naturally more prone to memorizing and utilizing numbers and statistics.

The right side of the brain controls the processing of visuals, music, feelings, and tones. Those who utilize their right brain are the arts and English people. They generally communicate better with visuals as opposed to facts or memorization. These are the “creative types” who think in a less linear and more holistic way.

For example, when a song is playing, a left brain person will be focusing on the song lyrics while the right brain will focus on the tune of the song.

While some people are able to fully use both sides of the brain and excel in all subjects, other people need some help. If you’re a left brainer, we have highly skilled expert writers who can write you an excellent paper for the arts and humanities. Whether it’s a research paper or an essay, we have you covered. If you’re a right brainer and you just can’t figure out tables or equations, we also have skilled writers who can cover you with the math and sciences.

References:
Melina, R. (2011, January 12). What’s the difference between the right brain and the left brain? Retrieved 30 August, 2015, from http://www.livescience.com/32935-whats-the-difference-between-the-right-brain-and-left-brain.html